I was only looking for Mr. Right Now…
All I want is a night of distractions to take my mind off the stressful business meetings I’ve had day. At the pub, I quickly spot the perfect counterpart to share tonight with. Whereas I’m all business, he’s tall, husky, long-haired as well as tattooed. We’re nothing alike, and yet click almost immediately.
His rugged biker looks are just a mask; one he quickly takes off when we’re alone. What I find beneath the surface might be too precious to let go. I don’t do relationships, generally. Neither does he. But come morning, the last thing we want is to say goodbye.
Could it be that I have accidentally stumbled across Mr. Right?
Read on and find out.
This body positive romance features a Big Handsome Man (BHM), and a woman who appreciates him just how he is.
Chance Encounters is a series of stand-alone novellas set in jolly old England, following a set of regular people as they find love in unexpected places. What do they have in common? When they meet, it is purely by chance, yet passion strikes immediately. They'll have to deal with the consequences of their actions once the sun comes up...

Realistic characters, pure emotions, true passion. Everything I write is about the characters: how they interact, what’s going on in their heads, how the passionate relationship develops and affects them. I don’t believe in keeping things hidden, or dressing them up just for show. Some of my characters are potty-mouths, most of them are less than perfect (yes, even physically). I aim to write a happy ending for all of them, without keeping anything behind closed doors.
Website • Facebook • Twitter • Newsletter • Goodreads • Bookbub • Amazon Author Profile

Posted by felinewyvern at 10:07 am No comments: Links to this post 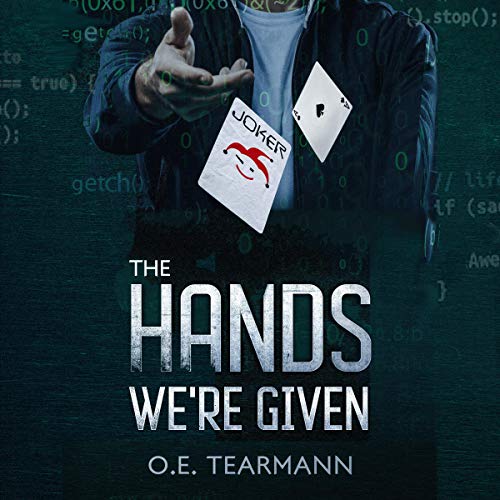 The Hands We're Given: Aces High, Jokers Wild (Book 1) Written by O.E. Tearmann & Narrated by Kirt Graves 5*
BLURB: Sex. Drones. Rock and roll.
Aidan Headly never wanted to be the man giving orders. That's fine with the Democratic State Force base he's been assigned to command: they don't like to take orders. Nicknamed the Wildcards, they used to be the most effective base against the seven Corporations owning the former United States in a war that has lasted over half a century. Now the Wildcards are known for creative insubordination, chaos, and commanders begging to be reassigned.
Aidan is their last chance. If he can pull off his assignment as Commander and yank his ragtag crew of dreamers and fighters together, maybe they can get back to doing what they came to do: fighting for a country worth living in.
Life's a bitch. She deals off the bottom of the deck. But you play the hands you're given.

My Review: “I was voluntarily provided this free review copy audiobook by the author, narrator, or publisher.” This is one of the best Dystopian novels I've listened to in a long time. The world building drew me in knee deep before I knew what hit me. The Characters had me laughing and crying, sometimes at the same time, and the plot line was intriguing and action packed. I want to say so much about this book and the characters I fell in love with, but don't want to give away spoilers, so I'll just give a small warning instead: if you don't like LGBTQ in your Science Fiction don't bother reading/listening to this. Though I will admit the sensitive way that aspect was woven into the story was the cherry on top of the Sundae that this book was for me. One other thing: The narrator was new to me but I loved the way he read the story and can't wait to hear other books narrated by him.
Posted by felinewyvern at 6:00 pm No comments: Links to this post

twice-spent comet by Ziggy Schutz
From Dusk to Dying Sun by Paige S. Allen
Lost/Found by Brooklyn Ray
Awry with Dandelions by J.S. Fields
The Far Touch by S.R. Jones
Ink and Stars by Alex Harrow
Horologium by Emmet Nahil
Death Marked by Sara Codair
Weave the Dark, Weave the Light by Anna Zabo
Add to Goodreads
Individual Synopsis
twice-spent comet
On an isolated asteroid, Fer serves out their sentence with a found family of ramshackle criminals. Life takes an exciting turn when they befriend Ophelia, a beautiful humanoid creature with a tail like a comet.
From Dusk to Dying Sun
Jay Morrison almost believes the rumors of magic and mischief haunting the US-50. But their partner, Luis Inoa, has made a career guarding the dusty Nevada trails. According to him, the only scary things on the highway are the silences, until a group of tourists break open the sun and disappear into a fiery blaze.
Lost/Found
When Hollis Griffin, a lonely sex worker living in Venice Beach, forms an unlikely friendship with a fallen star, she begins to face the truth about her life, her past, and what the future holds.
Awry with Dandelions
For thirty seconds every night, a disembodied specter named Mette visits with Orin who has long since written the ghost woman off as a recurring dream. But when Mette suggests meeting in real life, Orin’s inner world turns out to be more substantial than imaginary, and xie embarks on a journey to discover the truth of Mette and their strange connection.
The Far Touch
A long-standing coven of witches trek to their sacred space and accidentally discover life on another planet when their Solstice celebration interferes with a lone practitioner.
Ink and Stars
Locked in a contract to steal their ex-lovers ship, Chaz Neoma comes face to face with consequences, lost partnership, and the chance at a future, after discovering they aren’t the last Weaver in the universe.
Horologium
In the far reaches of the Horologium Supercluster, an astronaux is stranded alone on a long-distance astral ship where they’re visited by three apparitions, telling stories of ancestors who traveled space before them. Coeie must decide whether to follow the ghosts of the past, or forge their own path through the cosmos.
Death Marked
As chief security officer in the Lunar Guard, Enzi is in charge of the security for their sister’s coming of age ceremony. A fragile relationship with their family doesn’t make keeping Ulsa safe any easier, and neither does a group of pesky drones or a hidden plot to overthrow their sister’s place in the family.
Weave the Dark, Weave the Light
On a crisp night, Ari, a supposed elemental witch, meets Jonathan Aster, a powerful being they desperately want to understand. As they explore an intense, intimate and passionate relationship, Ari unearths long-hidden mysteries about themself and their magic.
Purchase
NineStar Press | Amazon
Smashwords | Barnes & Noble | Kobo

Posted by felinewyvern at 7:00 am No comments: Links to this post