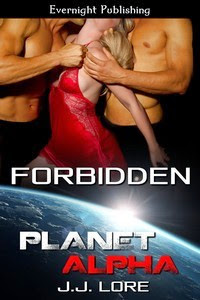 Forbidden (Planet Alpha #5)by J.J. Lore 4*
BLURB: Working to heal wounded Alphan warriors is the new duty of bondmates Leo and Deklan. Although recovered from severe injuries received on the field of battle, they are no longer fit to fight. Their orderly, all-male existence is turned upside down when an injured human female becomes their new responsibility.
Aura Tremain wakes up in an alien hospital, healing from a beating delivered by the scaly Xyrans who’d kidnapped her. Upon her discharge, two handsome Alphan men offer her refuge until she’s well enough to travel.
Even though Leo and Deklan know they will never be permitted to bond with Aura as their souls demand, they can’t ignore the desire she stirs in them. Her time with them is short, but so intense. Will the intimacies they share be strong enough to withstand the expectation that bondmates are for battle-worthy warriors? Can their passion bind the three of them forever?
My Review This was (currently) the last one of the Planet Alpha series for me to read. As in all the other ones the story was interesting and erotic. In this case though it had a pair of Alphan's who were not the apex of warrior fitness and health but were still very, very hot and sexy. I loved the bad-ass attitude of Aura and thought she coped well with everything that happened to her. I especially liked the ending and the way it was so different from the previous ones I'd read. 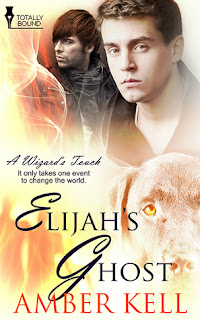 Elijah's Ghost (A Wizard's Touch #4) by Amber Kell 4*
BLURB: It only takes one event to change the world.
Elijah Trenton had always been considered a weak wizard. With little magic and an overpowering father he’d expected to spend his life teaching. When an accident reveals his ability to talk to the dead, new possibilities open up.
Devin Stewartson had been eyeing Elijah for months. The shy redhead drew his eye from that first day, and only the thought of a relationship had him shying away. When Elijah saves Devin’s life, Devin decides some things are worth a chance.
Old enemies and new adversaries try to tear the two men apart, but love can withstand most anything and even death can’t part two men fated to be together.
My Review: I enjoyed reading another one in 'A Wizard's Touch' series but this one had a few twists and turns I hadn't expected. I don't want to say too much in case I give them away but I will add that I loved Reaper and hope to see him mentioned in future books. He might even replace Gideon as my favourite character in the series now.

The reread of Omorphi is just as emotional as the first read - why do I do this to myself? Oh yeah, I enjoy a good in depth heart breaker once in a while, especially if it has a happy ending :D

Posted by felinewyvern at 7:31 pm