Review of With A Kiss by Kim Dare

Another book that's been on my to-read list for a longish while: 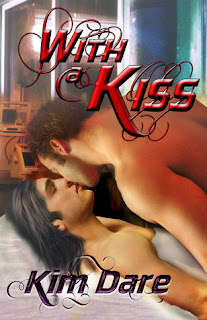 With a Kiss by Kim Dare 4*
BLURB: When Liam Bates volunteered to visit lonely patients at his local hospital, he expected them to be able to talk back when he chatted to them. But, when he’s assigned to visit a comatose man, he soon finds himself spilling out his whole life story in an effort to fill the silence. It’s not long before the peace and comfort he finds in the man’s hospital room becomes Liam’s refuge from an increasingly hostile world.
Vampire Marcus Corrigan has been trapped inside his paralysed body for over three years, unable to communicate with anyone. The chatty young man who visits Marcus quickly captivates him, and Liam’s softly spoken words soon have him determined to rescue the boy from his current life, but, unable to move a muscle, all Marcus can actually do is lay there and listen.
There’s only one thing that can wake up Marcus. There’s only one thing that can save Liam’s sanity. Everything is about to change for them both, and it will change with a kiss.
My Review: So this story has an abused man and a vampire in a coma who awakens on being kissed by the man. Fairytale? Probably! But it sure was a hot one, with Marcus teaching Liam the difference between submission to a caring Dom and abuse from a bullying ex boyfriend and some really great sex scenes that were well written and not put in just to titillate the reader. Each and every one made sense within the storyline and showed the emotional connection between the two guys. I enjoyed this story as much as I expected to given who wrote it. Kim has a way with words that makes reading her stories a treat.

Only the one Love's Landscape read this time:
Zippadacious by A.R. Noble 4*

and one listened to:
Audiobook: Scent of Danger: Dale Kinsall Mystery, Book 2) by Doranna Durgin Narrated by: Tom Schiff Narration: 5* Story: 5*
Posted by felinewyvern at 6:21 pm