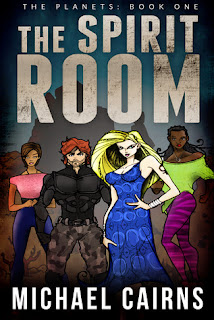 The Spirit Room (The Planets #1) by Michael Cairns 4*
BLURB: ‘The Avengers meets Magician' The Planets is superhero conflict on a global scale.
An ancient cadre of magicians
A select team of extra-ordinary warriors
An unseen foe
As two ancient forces battle for control, reality as we know it is being torn apart. Caught somewhere in the middle, and tasked with ridding the world of the insidious alien intelligence are The Planets. Neptune hails from Rio, the gay daughter of strict catholic parents. Mars, from Ireland, still missing the sister he lost years ago. Uri grew up on the streets of New York, and Venus… well, no one knows and she isn’t telling. Imbued with extra-ordinary powers, these highly trained individuals take the fight across the globe. With startling and unnerving revelations at every turn, the depth of deception is only now becoming clear…

My Review: I received a copy of this book in return for my honest review. Thank you Michael. I feel exhausted! That was a very frenetic story and even though I put it down quite often (I needed that break time) I still felt that everything was on fast forward. Don't get me wrong it was a very good story and had the added value of not making the superheroes into clones of the Marvel or DC Comic ones. It's just that I had too many unanswered questions by the end of the book. On the plus side the characters are well rounded with plenty of back story eventually given on them and it had plenty of intrigue and action to suit most people. On the negative side there were a few times I felt quite lost and there were a few editing errors (probably more than I spotted). Not sure if I'll try reading book two, it will depend o nif it looks like it will be as frantic as this one and if I feel like diving back into that wild rush.

Until the Bitter End by L.L. Bucknor 1*

Starlight And Constellation: Gemini by Alexis Woods 1*
Posted by felinewyvern at 5:12 pm