The Servant by Mary Calmes & others reading stuff 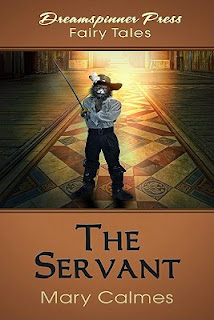 The Servant by Mary Calmes 5*
BLURB: After saving his younger brother’s child, Daemon Shar is cursed by a witch and runs far from home, a stray who will seemingly never be anything more. But destiny is hard to outrun, even for a man who is now more cat than man beneath his robes and cowl. A chance battlefield meeting between he and Ehron, a foreign lord, gives him purpose amidst the darkness of his accursed life. Soon Daemon finds that his true nature cannot be corrupted no matter the form he inhabits.
As Ehron’s consul, Daemon plots and plans to shape his new lord's future so that he may leave it blessed when he runs away yet again. But he never counted on his soul hungering for Ehron’s brother Gareth or for his past to catch him by the tail at last.
My Review: I love Mary Calmes books, as she has a wonderful way of bringing all her characters to life (even the minor, in for a few minutes ones)and this book was no different. At times I was reminded of Puss-in-boots because of the cat aspects of the hero and the way he creates situations to help his friend Ehron. But mostly I was just so fixated on reading what came next that I didn't do anything I had planned for the day and I only meant to read the first chapter!

Plus one short story, one audiobook and one Love's Landscape one to rate as well

Goldilocks and His Three Bears by A M Riley 3* (Some of it was a little far fetched but it was great as a bedtime erotica).

Science and Fiction by Ray Van Fox 5* (Go read this at LL on the M/M Romance group if you like unusual science fiction concepts).

Posted by felinewyvern at 7:56 pm