A Call to Arms (The Arden Chronicles #1) by Shiriluna Nott 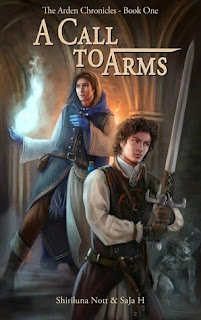 A Call to Arms (The Arden Chronicles #1) by Shiriluna Nott 5*
BLURB: War is brewing on the eastern border of Arden. The shaky truce between Arden and the neighboring realm of Shiraz has all but dissolved, and both sides are building their forces for battle. But in the quiet farming community of Willowdale, the rumors of war are the least of young Gibben Nemesio’s concerns. With both parents dead and two younger brothers to care for, Gib doesn't have time to focus on anything besides keeping food on the table. Everything changes the day he receives a conscription notice and must report to Arden’s capital.
In Silver City, Gib is forced to leave his life as a farmer behind when he enters the legendary Academy of Arden as a sentinel trainee. If called to war, he will have no choice but to go, for the Sentinels of Arden are the realm's first line of defense against the evils beyond the border.
A newcomer to this breathtaking city of stone, Gibben finds himself thrown into a world of cutthroat politics and scandals that run deeper than he ever imagined. Caught between the responsibilities to his family and to his country, Gib struggles to find balance. When he unwittingly overhears a sinister plot--that if seen to fruition will bear dire consequences for all of Arden--the young sentinel trainee must find a way to warn those in power before it is too late.

My Review: Complimentary Review Copy Provided by Author Have you ever read Mercedes Lackey's Collegium Chronicles? Or maybe Elizabeth Moon's Deeds Of Paksenarrion? If you have, then you know that when I say this book is in a similar vein, you are in for an epic fantasy read with good characters and a lovely, magical and intriguing story. In fact this is such a good read that I didn't put it down more than I really needed to (a visit to the doctor and some shopping :( ) and had just finished it before this review. I hope that book two isn't too long in getting published as it is going on my wishlist immediately. I know I should say something about he story itself but if I start I will end up gushing so much I will be giving away spoilers and all my readers know I don't do that. So take my word for it you won't go wrong buying this one if you want an epic 'young boy grows to manhood in service to the crown' fantasy book. One word of warning it has an m/m romance but, as the main character is a young teen, it is extremely mild.
Posted by felinewyvern at 6:46 pm