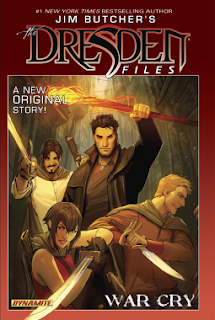 BLURB: A war is raging between the vampire forces of the Red Court and the White Council-a war the wizards are losing. So desperate are the Council that they’ve dragooned the experienced and the outcast to reinforce their thinning ranks of Wardens. One of these draftees is one Harry Dresden, Chicago’s only wizard for hire and a guy who’s long been looked upon with suspicion by the supernatural authorities. Now, he’s one of them, and his first big mission as a Warden is a doozy: take a small team of greenhorns to a frigid town in the middle of nowhere to rescue a handful of mortals who’ve been targeted by the Red Court.

My Review: Complimentary Review Copy Provided by Publisher Through NetGalley Having been in written format for a long while and had a TV series made from the books Jim Butcher's Dresden Files have even branched out into Graphic Novel territory. This one is the second one I've read now and I was not disappointed. The art work was brilliant and the storyline great. My only problem was my own eyesight and the medium on which I read the novel making it hard to do. I strained to read the words due to a lack of ability to change the size of the font without ruining the look of the pictures. However I persevered and, apart from the odd headache from eye strain, I have nothing negative to say about the novel itself. If you have enjoyed the Dresden Files on TV or have been reading Jim Butcher for a while you won't need telling to go an buy this one. If however you are new to either Graphic Novels or Jim Butcher this is a good one to start with, go ahead try it, you won't be disappointed either.
Posted by felinewyvern at 5:41 pm