Reviewing Prince Of Faith by Belinda McBride - A 'Must Buy' book! 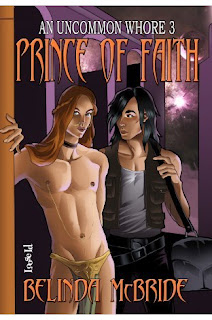 Prince of Faith (An Uncommon Whore #3) by Belinda McBride 5*
BLURB: Held captive in a whorehouse, Markus Dayspring wakes every morning with a thirst for revenge, and collapses every night with a prayer for strength. He lives on in spite of deadly addictions and a crippling, shameful secret. When he’s rescued by a man from his past, his reawakened love threatens to crush his damaged soul.
Caius also has a secret, one that could ultimately kill him. But his vow to rescue Markus is stronger than guilt, fear and even his loyalty to King Helios. Too many have died because of Caius and rescuing the missing prince might allow him to sleep without nightmares.
Old habits are hard to break and new pain threatens their growing love. Yet one gleaming ray of hope continues to guide them to safety, even in the face of an unexpected violation of trust. With the stakes growing higher by the hour, Markus and Caius must learn to have faith before they can heal and face the future together.

My Review: This was an eARC from the publishers in exchange for an honest review. The book is out at the end of the month (20th I believe) but you can download the first three chapters for free from LooseId right now.
So on to that honest review.
I loved it! Now I could stop there as I am loath to continue incase I give away any spoilers. Suffice to say that the book lived up to my every expectation of well written characters and an intriguing and action packed story line. We even get to see Helios and Griffin near the end, which is a bonus for all those out who are big fans of that pair! However the main pair in this story are Marcus and Caius and the way they both deal with the betrayals, violations and hurts of the past and learn to deal with the present and look forward to a, hopefully, happier future. Belinda takes a pair of broken men and gives them a hard time and really puts them through the wringer but, as a loving touch, she also gives them each other. Throughout all the hardships of drug withdrawal and illness they find they trust no others but themselves, not even family. I best stop here or I will be giving away those spoilers and I want everyone to go an buy the book when it's out and read it for themselves so they can feel all the emotions I felt whilst reading this book. It will be worth it I promise.
Posted by felinewyvern at 4:30 pm