The trouble with reading good books

is that afterwards it's hard to find something to hold your interest. So since my last update I have read a bunch of short stories one of which was a read for honest review. 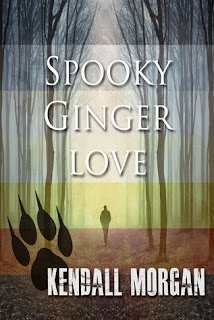 Spooky Ginger Love by Kendall Morgan 3*
BLURB: Keith Norwood, a handsome African-American gay bear, came to Camp You-Mee's Bears Haunted Halloween Boo-Nanza Extravaganza for some cheesy holiday thrills and a little ass. A fan of the one-night stand, he thought all he wanted was to get laid. The camp’s cute assistant manager with a fantastic butt was Keith’s first choice.
Instead, he loses his way in the haunted woods. He finds his way and himself with the help of Ronnie Gans, a big, friendly, hairy redhead, who is unlike any one-night stand Keith has ever had.

My Review: I received this from the author in exchange for an honest review.
The first thing I have to say about this is that it made a nice change to read a main character who was not a generic white guy. The second is that it will be difficult to give a full review without adding spoilers and as most of you know I hate spoilers. So the book. . it was a nice and easy read with a lovely little twist. I could have wished for a longer story (that is in fact the reason for only 3*s)and wish the author had given more depth to the relationship that Keith had with Ronnie. In my opinion that would have made more sense to the ending, but I am a little biased as it would have given me a longer story to read if she had :D Let's just say if you want to read a short m/m story about a cute Bear and his spooky weekend then buy this book.

Ratings for the other shorts I've read since my last update:

Posted by felinewyvern at 6:55 pm