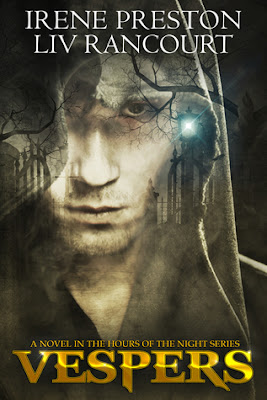 Vespers
By Irene Preston & Liv Rancourt
Release Date: September 13, 2016
ISBN: 978-0-9968099-3-1
Synopsis
Thaddeus Dupont has had over eighty years to forget…
The vampire spends his nights chanting the Liturgy of the Hours and ruthlessly disciplines those unnatural urges he’s vowed never again to indulge. He is at the command of the White Monks, who summon him at will to destroy demons. In return, the monks provide for his sustenance and promise the return of his immortal soul.
Sarasija Mishra’s most compelling job qualification might be his type O blood…
The 22-year-old college grad just moved across the country to work for some recluse he can’t even find on the internet. Sounds sketchy, but the salary is awesome and he can’t afford to be picky.  On arrival he discovers a few details his contract neglected to mention, like the alligator-infested swamp, the demon attacks, and the nature of his employer’s “special diet”. A smart guy would leave, but after one look into Dupont’s mesmerizing eyes, Sarasija can’t seem to walk away. Too bad his boss expected “Sara” to be a girl.
Falling in love is hard at any age…
The vampire can’t fight his hungers forever, especially since Sara’s brought him light, laughter and a very masculine heat. After yielding to temptation, Thaddeus must make a choice.  Killing demons may save his soul, but keeping the faith will cost him his heart.
Vespers is a complete novel with no cliffhanger. It can be enjoyed as a standalone or read as the first book in the Hours of the Night series.

EXCERPT
Thaddeus Dupont is having a Skype conversation with his superior, Brother George…

About the Authors
About Irene Preston
Irene Preston has to write romances, after all she is living one.  As a starving college student, she met her dream man who whisked her away on a romantic honeymoon across Europe.  Today they live in the beautiful hill country outside of Austin, Texas where Dream Man is still working hard to make sure she never has to take off her rose-colored glasses.
Where to find Irene
IrenePreston.com Facebook | Twitter | Pinterest | Mailing List | Goodreads
About Liv Rancourt

I write romance: m/f, m/m, and v/h, where the h is for human and the v is for vampire … or sometimes demon … I lean more towards funny than angst. When I’m not writing I take care of tiny premature babies or teenagers, depending on whether I’m at home or at work. My husband is a soul of patience, my dog’s cuteness is legendary, and we share the homestead with three ferrets. Who steal things. Because they’re brats.
Where to find Liv
LivRancourt.com Facebook | Twitter | Mailing List | Goodreads
Add to GoodReads
Read More on IrenePreston.com
Read More on LivRancourt.com

A Rafflecopter Giveaway
For my review of Vespers click here
Posted by felinewyvern at 2:52 pm