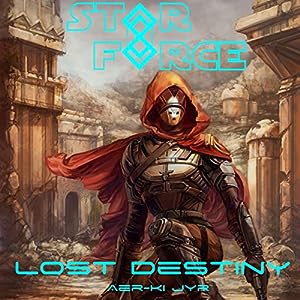 Star Force: Lost Destiny: Wayward Trilogy, Book 1 written by Aer-Ki Jyr & narrated by Kristen James. 5*
BLURB: What's it like to be the last Human?
And not even know you're Human?
Esna Donovan was stranded on a planet full of people that didn't look like her as a child along with her brother. Their father was murdered, leaving them sitting in their spaceship waiting for his return.
They remember almost nothing from before that time, when two Calavari who were business associates of their father took them in and told them they could never be seen outside their full body armor. They've honored their father's dying wish, living and working on the Calavari's farm while exploring the barren wastelands looking for bits of technological salvage from the time before the great cataclysm.
They don't know they're Human, just that they're different and they can't show their skin in pubic. The two siblings have lived almost their entire lives in their self-styled body armor and dream of leaving the farm and doing something that mattered...but there's nowhere to go. Nothing to do.
Then one day that all changes and Esna is set forth on a rollercoaster ride of a life she could never have expected when the word "Human" is once again spoken on the planet...only it's a word of rage and ear, with the local aliens trying to kill whoever it is applied to, though they've never seen one before.
Regardless, the word is tagged to her and she must run...with a little help.

My Review:“I was voluntarily provided this free review copy audiobook by the author, narrator, or publisher.” It takes a good book or a good voice to keep me listening to a female narrator, in this case it was both. Kirsten did a wonderful job bring Aer-Ki Jyr's world to life and together they gave me a wonderful 9+ hours of living in Esna's shoes and meeting interesting aliens whilst learning about Star Force and what it means to be human. By the end of the book I knew I was going to mark both of them on my 'look for more by these people' list. Meanwhile I'll be using my next few audible credits in buying some more stories about Esna and Star Force.
Posted by felinewyvern at 7:52 pm