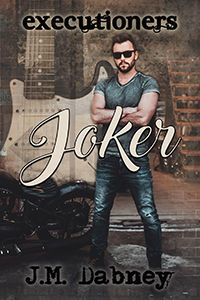 Joker (Executioners #2) by J.M. Dabney 2*
BLURB: Joker, what a misnomer, but Jackson Webb’s friends were idiots. He’d joined Executioners almost three years earlier after the lead singer King caught him playing his guitar behind his garage. It broke up the monotony of his life, but once he got bored he’d move on to another distraction. He wasn’t nice. He sure as hell wasn’t friendly. He was what he was, his friends handled his attitude and standoffish nature just fine. At thirty-eight he was pretty sure he was too stuck in his way to change shit now.
Demetri “Dem” Urban was settling into a new life in the middle of nowhere. Okay, he was hiding from everywhere in a kitchen as far removed from his five-star kitchen back in New York. Gideon invited him to stay with him and his wife for awhile just until he could get everything back on track. He didn’t see it happening, but he had to admit the scenery wasn’t bad even if the man had the personality of a rabid, man-eating bear. Dem did like a challenge and that fit Joker Webb perfectly.

My Review: I recieved a free copy in exchange for an honest review. This was a strange story for me - both Main Characters were full of personal issues and Joker had more than most. It wasn't a book I could get too invested into because of the strange relationship the two men had and the easy way they resolved their problems seemed a bit unrealistic and quick to me. It comes to something when the most enjoyable part of the book for me was the parts with the fiesty little dog that Joker has.
Posted by felinewyvern at 7:07 pm