Reviewing King of the Fire Dancers by S.T. Sterlings 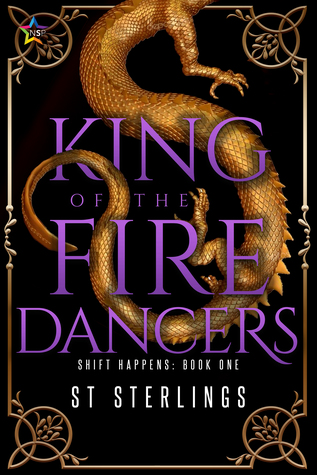 King of the Fire Dancers (Shift Happens #1) by S.T. Sterlings 4*
BLURB: When he’s propositioned by a wealthy stranger, it seems Coy Conlin’s impoverished life is about to be upgraded. But before he can share the news with his family, he comes home to find his grandmother murdered and his little brother missing. To make matters worse, he’s thrown in prison along with every other shifter under the Sovereign’s orders.
August Seaton left his laboratory job at the Asuda Registry to become a Registry officer. But after a mission with his partner goes horribly wrong, August ends up with Coy’s dead grandmother on his hands, and Coy thinks he’s the murderer. Worst of all, his partner discovers his secret.
August is a shifter.
And now he’s Coy’s cellmate. Coy and August must survive each other, abusive guards, and a scientist hell-bent on forcing Coy into a breeding program.
Teamed up, the pair escape prison and journey across the country. With the Registry hot on their trail, they have enough things to worry about. Falling for each other wasn’t supposed to be one of them.

My Review. I received a copy from the publishers in exchange for an honest review I'll start by saying that this would have been a 5* review if it hadn't ended on a semi cliffhanger. Without giving away any spoilers, the cliffhanger wasn't as abrupt as it could have been and the ending did have a nice feel good factor to it, but - CLIFFHANGER!
I am going to assume (and truly hope) the relationship continues in the next book or I will be very upset. I am invested in the two main characters now and I want to know how they get on and solve the problems they have. I'm also loving the different take on the interaction between humans and shifters in this world. Apart from the ending (I will always hate cliffhangers, even little bitty ones) this is a really good book and I look forward to reading more from this author.
Posted by felinewyvern at 7:02 pm