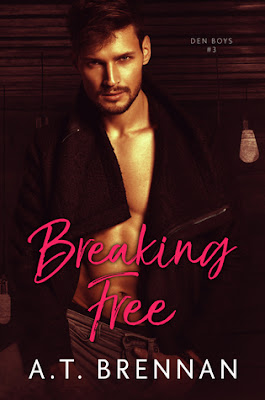 Breaking Free (The Den Boys #3) by A.T. Brennan 3*
BLURB: “I would never forgive myself if something happened to another man I cared about because I’d been careless and given in to temptation.” ~ Zander
The last thing I was looking for was a relationship, then I laid eyes on a dancer at a nightclub and my entire world was flipped upside down. Kai is everything I’ve ever wanted, but shouldn’t have. I’m haunted by a past I can’t seem to break free from, and I’m not sure I can be the man Kai deserves. He makes me want to try, but I worry that I’m broken beyond repair.
“There was already a big enough stigma attached to being a go-go dancer, but add being a webcam model to the mix and people tended to assume things about me.” ~ Kai
School, dance, cam, repeat. My life was on a constant loop as I struggled to keep my head above water. After seeing Zander in the crowd while I was dancing, I knew I had to meet the handsome stranger who took my breath away. I don’t know if I’m the right man to help set him free from his pain, but I’m going to do everything I can to try and help him see that the past doesn’t have to define his future.


My Review: I received a copy in exchange for an honest review I'll start by saying that, although this is Book 3 of The Den Boys series, it can be read as a standalone. I liked the book but not as much as the first one. It was nice to read about the characters from the first two books and to find out more about Zander. I also quite admired the character of Kai and what he did to handle his life. The relationship was a nice slow build up after the initial frenzy of their first meeting but somehow I just couldn't really enjoy the story as much as I thought I would. This doesn't mean there was anything wrong with the book and it was probably all down to me as I have had to cope with a sick dog whilst reading it. I will certainly reread it when I am less distracted and I still look forward to book #4.
Posted by felinewyvern at 6:41 pm