A Christmas Eve review of On Your Knees, Prospect by K.A. Merikan 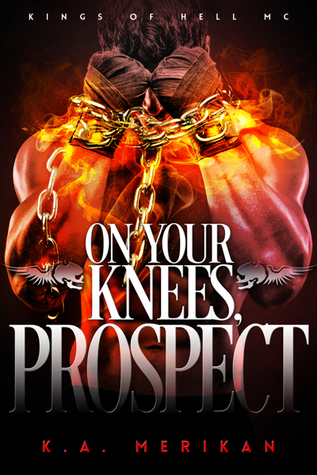 On Your Knees, Prospect (Kings of Hell MC #3) by K.A. Merikan 5*
BLURB: --- There is freedom in blacking boots for the right man. ---
Jake. Kings of Hell MC Prospect. Obedient. Desperate for approval.
Vars. Dominant. Stern. Undead.
Jake is itching to become a patched member of the Kings of Hell MC.
For two years he's toiled as the only prospect. So when a new guy swans in and thinks he'll get a patch in no time just because he's got friends in high places, Jake is there to stand in his way.
Only that the guy is older, more experienced, drives a Harley, and has the kind of boots Jake craves to lick.
But he won't.
Because he only fucks patches.
Vars is ready to find a new home in the Kings of Hell MC after a messy relationship led him straight to hell. In comparison, the pretty, blue-eyed prospect could be just the pleasant rebound he needs.
The boy is a brat, but that could be amended with a firm hand and a gag.
If only Jake was ready to admit to his submissive needs, Vars would gladly take him under his wing.
That is, until he finds out something inhuman resides inside of Jake.
Vars didn’t cheat death only to call out to it again.
But stuck together in one room, keeping each other’s secrets, they might just have to become allies, no matter how unwilling. Because if there is something Vars can’t resist, it’s a boy with pleading eyes.

My Review: I received a copy in exchange for an honest review. This series is getting better and better with each successive book. With each book concentrating on one couple, but also following a story arc in the paranormal aspects of the club, it's been a real treat to read and I can't wait to see where it will lead me with the next book. In this one we meet Vars and Jake and find out why Jake has been a prospect for so long. Without giving away spoilers can I just add that Jake's introduction to the slightly creepier side of the club premises was both intense and scary but it also kept me reading well past my bedtime. I would say, read the first two books to get the best out of this series, and then hang on for the creepiest ride a romance ever had.
Posted by felinewyvern at 5:50 pm