Review of Christmas Can Kiss My Dickens by Hunter Frost, 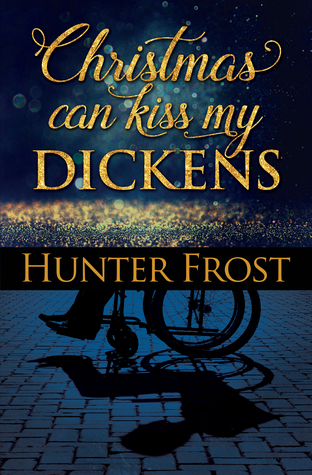 Christmas Can Kiss My Dickens by Hunter Frost 4*
BLURB:Tim Cratchit hates everything about Christmas—the gaudy decorations, the sickeningly cheerful music, and the pathetic tradition of exchanging meaningless gifts. Not to mention the lousy memories of holidays passed. When Santa gave other kids Barbie dolls and Tonka trucks, Tim got stuck with a wheelchair. Now, the one thing Tim looks forward to on Christmas is catching up on work and ignoring all the festive drivel.
That is until Henry Scott, Tim’s star employee, interrupts his boss’s plans to give him a present. Tim unceremoniously shows the man the door, but Henry won’t go so easily. Inspired by liquid courage, Henry finds the guts to tell Tim exactly what he thinks of him—and it’s anything but merry. Except for that kiss…
What follows only makes Tim question his sanity. A near death experience, flashbacks, premonitions, and visits from his deceased godfather show Tim how lonely and depressing his life has become. Will Tim be able to recapture the spirit of Christmas or will he forever remain a bona fide Scrooge?

My Review: I received a free copy from the author in exchange for an honest review. Due to a poorly dog, and a heavy load of crafting for Christmas Gifts, I am not doing as much reading as normal so this was mainly picked for the fact that it was a short story and it seemed to involve my favourite Christmas story from Dickens.
Actually, the story was like someone had taken most of the elements of 'A Christmas Carol' and thrown it into a bag, shook it up and then took pieces out at random to put them back together as a wonderfully sweet and warm Christmas Story. But more than that it was a lovely bit of writing that pulled you in and gave you more than expected from so few pages. I recommend this to anyone who likes a quick, sweet and feel good romance and doesn't mind a Dickens novel being mashed up into a M/M story.
Posted by felinewyvern at 6:47 pm