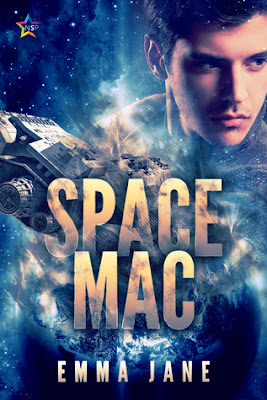 Space Mac by Emma Jane 2*
BLURB: Cocky escort Mackenzie “Mac” Jones has just the right type of blood so that when he steals an odd silver brooch from a client, it transports him to a strange planet. Frightened and confused—and confronted by aliens—he flees and ends up bumping into a handsome humanoid male named Teevar.
But Teevar and his companions are also on the run, and Mac finds himself embroiled in the affairs of his new friends with no idea how to get back to Earth. Can Mac and Teevar survive long enough to work out their feelings for each other? And will Mac ever see home again? (

My Review: I received a copy of Space Mac by Emma Jane via IndiGo Marketing & Design in exchange for an honest review. When it said the main character was a cocky escort I did not think he was going to be so obnoxious to me. I almost gave up reading this because of him, and it was only the aliens who made me keep going. As it is it's taken me days (19 to be exact) to finally read it finished and I still don't like the guy. Now I'm not saying this is a bad book as most of the story was good, but it needed more of something and less of the obnoxious cocky attitude from Mac, at least it did for me to have enjoyed it more.
Posted by felinewyvern at 6:56 pm