A Very Late Review of Blackwelder 2164 by Christopher D.J. 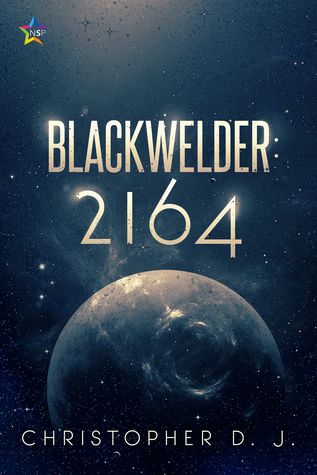 Blackwelder 2164 by Christopher D.J. 3*
BLURB: When it comes to hitting his target, Spencer Blackwelder can’t miss. But when it comes to hitting the mark in other areas of his life, his aim is way off, which is definitely a problem when you’re a military sharp shooter preparing for war with an alien species.
As penance for past mistakes in friendship and in love, Blackwelder makes the bold choice to relocate to Fort Felix, a military base on Neptune’s moon, a decision that could end up costing him his life. Once there, he meets: Juan Miguel Arías, to whom he takes an immediate liking; Vernita Burton, a true friend; and the men and women of Brant Squad, a group of lovable losers that he eventually takes under his wing.
Blackwelder is surprised to discover he has something to live for again, but all of that is threatened when war finally arrives on Fort Felix’s doorstep. Can Blackwelder find the hero within in time to save his squad, his planet, and the man he loves

My Review: Let me start by saying that I received this book way back in January in exchange for a review and somehow managed to lose it on my Kobo! Until today that is, when I felt like reading a military sci-fi story. My apologies to all concerned who must have been very upset at my dereliction of duty (is it a 'duty' when you enjoy reading and telling people about the books you read?).
So 'what about your opinion?' I can almost hear you cry. Well my opinion is that, if you want to read a military sci-fi with a hint of m/m romance and an alien war then you won't go far wrong in getting this one. It's fun, fast, intriguing and has a lot of great action and I recommend it to anyone who wants a taster of a military sci-fi but hasn't got time to read something like 'Old Man's War by John Scalzi' or Mote In God's Eye by Larry Niven'.
Posted by felinewyvern at 10:34 pm