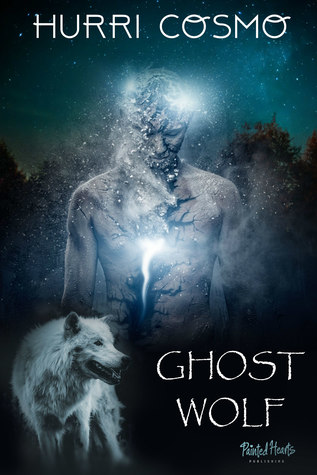 Ghost Wolf by Hurri Cosmo 4*
BLURB: Hi, my name is Trevor. I’m a wolf shifter.
I say that like I know what I’m talking about. I don’t. I was simply running off a ton of steam one day when I was around eleven and bam! Okay, not quite that easy or fast but it happened when I was young and stupid. I’m also gay. I say that like I know what I’m talking about with that too. I simply don’t.
I’m grown up now and living in the big city which has me too busy to much care about either one of those things. I get out and run my wolf when I can, trying like hell to stay out of the local pack’s territories. Belonging to a “family” just sounds like too much work, and honestly I don’t have time for such things. Besides, I was told when I was young the color of my wolf was all wrong. Too silver...or something. Metallic. I kinda thought it looked cool in the full moon. “Pack Alpha would kill ya soon as look at ya.” My grandpa used to say. Course he wasn't my real grandpa. Just an old man who lived down the street, but he was a shifter too and I thought he knew it all. He probably knew diddly either, but a guy can’t be too careful. And romance? Way off the radar.
Only now someone has started killing wolves. Started leaving broken bodies lined up in a nice little row next to the high school in my home town and it's got me to thinking. If a shifter is killed in his or her wolf state, do they stay that way? Were these dead wolves like me? The hell of it all is this: being a shifter isn't common knowledge. It bothers me enough that now I want to find out more. See if there's anything I can do. Kind of like a super hero.
Oh yeah. Probably forgot to tell you this too. I can turn invisible.
Yep, Ghost Wolf to the rescue.

My Review: I received a copy from IndiGo Marketing & Design in exchange for an honest review. If you like a mix of fantasy, romance and action then try this book, because it has all three. Yes, at times it does seem a little young adult, but the sex scenes sort of say it isn't, because they are fairly hot to be honest. Mostly though I just liked that there was decent world building and strong characters plus there's an opening or two for secondary characters to get their own stories later. I can't say a lot without giving away too many spoilers but, I will say that I especially enjoyed Trevor's inner dialogue about his 'super hero powers'.
Posted by felinewyvern at 8:05 pm