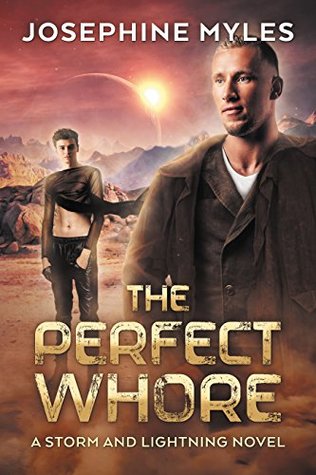 The Perfect Whore (Storm and Lightning #1) by Josephine Myles 4*
BLURB: Being the object of everyone’s sexual fantasies ain’t all it’s cracked up to be…
On a mining colony planet a long way from Earth, bandit Jedd Lightning dreams of making enough money to get his ship spaceworthy again. During a robbery at a high-class brothel, he meets gorgeous alien rentboy Storm and is instantly smitten—but the heist goes south and Jedd has to high-tail it out of there with only half the loot.
Enslaved by a fierce Madam, Storm’s shapeshifting talents make him the most sought after whore on Talmak. He literally can’t stop himself becoming his client’s fantasy lover. Sick of enforced transformations, he wants to escape, but he’s closely guarded and has no experience of the unfamiliar city outside the brothel.
Storm is willing—and eager—to do anything to persuade Jedd to break him out of his gilded prison. Lucky for him the arrogant outlaw needs Storm’s help to free his crewmate, held as hostage by a vicious mob boss who wants Jedd to complete the theft he was hired for. Storm keeps blowing away Jedd’s expectations—but with both the law and the mob against them, they could end up with nowhere left to run.

My Review: I received a copy from Signal Boost Promotions in exchange for an honest review. This is the first Sci Fi book I've read from this author and I enjoyed it immensely. I do hope that the time for Storm and Lightning #2 isn't going to be too long of a wait.
I can't make up my mind if I liked the alien shapeshifter Storm, or the lovable rogue Jedd Lightning more, but together they were a wonderful couple. As for the secondary characters, I hope they turn up now and again in future books because they were equally well written and interesting without detracting too much away from the main ones. I liked the whole world building too and hope that book two follows the couple into their exploration of the planet.
In fact the only thing I disliked about the whole book was the lack of length and the minor cliffhanger ending. Hence not giving it the 5* I was thinking of giving before I reached the end.
Posted by felinewyvern at 7:28 pm