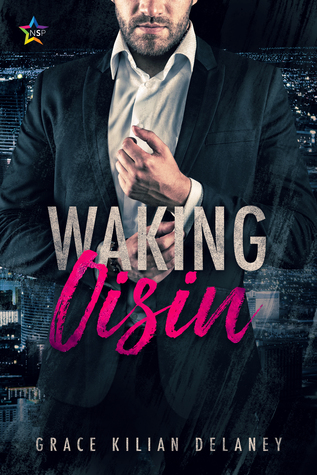 Waking Oisin by Grace Kilian Delaney 3*
BLURB: Oisin Harrison blames his fiancée’s distrust for ruining their relationship. He blames his father for pushing him into law school. But more than all that, he blames himself for letting other people’s expectations stop him from going after his dream. But dressing in drag with his best friend is the one thing Oisin refuses to compromise.
As Sin, he meets handsome Trenton Fisher, a man who appreciates Oisin’s cross-dressing. Trent upends his world by doing things to his body no one ever has, making him want more than just one night together. That is, until Oisin discovers his hot hookup works at his father’s law firm and is angling for a promotion.
To complicate things, Trent doesn’t seem to recognize Oisin out of drag. Or does he?
Will Oisin and Trent’s magnetic attraction grow to something deeper, or will it threaten to jeopardize their careers and futures?
Waking Oisin contains characters from Seven Minutes but can be read as a standalone

My Review: I was gifted a free copy in exchange for an honest review. I really wish writers would put a pronunciation guide when using unusual names. I spent a good part of the start of the book reading the main characters name as 'Oy-sin', reinforced by the use of the name Sin whilst in female costume. Then along comes a bit with his father where it is noted by Trenton that the father pronounced it 'Ocean' which totally threw me out of the story for a while. I also wish the writer had been a little more consistent with the behaviour/maturity of Oisin too - I had four boys and I know they aren't as inconsistent in behaviour or maturity as is shown here. And, as I seem to have broken my no spoilers rule already, I best stop here and just say the sex scenes helped make this book a 3* and if the author had used the same care in the rest of the book I might have given it more.
Posted by felinewyvern at 6:37 pm