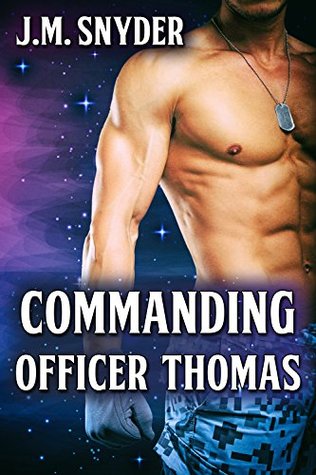 Commanding Officer Thomas by J.M. Snyder 3*
BLURB: Lieutenant Lee Mallory spends his time off duty playing video games. There isn't much else to do while stationed on the USS Nova out in deep space.
Unfortunately, a run in with his commanding officer, Jonan Thomas, strips him -- and everyone else onboard -- of their gaming privileges.
Thomas has had it in for Lee from day one, when they got off on the wrong foot. Now, banned from using the game server in the rec room, Lee sneaks online in his quarters after hours, looking to play.
That's where he meets a fellow gamer onboard who's interested in a different kind of game. As much as Lee wants to hook up, though, he can't afford to get into any more trouble.
Can Lee take command -- in the game and in the bedroom -- without further aggravating his CO?

My Review:I received an ARC from Signal Boost Promotions in exchange for an honest review. I will keep this short, else it might end up longer than the story, (which I enjoyed) I read the whole thing whilst eating breakfast. There was enough substance to make it a full story (albeit a short one) but the setting of a spaceship didn't really have a as much to do with the story as I had hoped, it could just as easily have been two men in a modern military setting.
Posted by felinewyvern at 6:28 pm