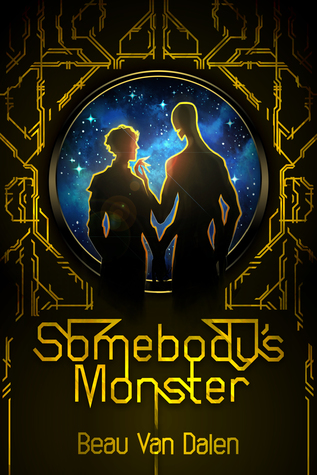 Somebody's Monster by Beau Van Dalen 2*
BLURB: A tale of mystery, thrill, and erotic love.
Vance Steward only wanted to start over.
His wish was granted – but not in the ways he’d expected.
Chased by a Kraken responsible for the murder of their commander, fighter pilot Vance Steward and his crew navigate through unknown territories, their ship running on its last power supplies.
Victim to a freak accident, Vance is gravely injured and can only watch as his comrades fight for their lives, his hopes of survival growing thin. However, between darkness and stars, Vance finds himself forming a close bond with Luenos, an alien passenger robbed of sight who seeks to find his long-lost family.
Left to his own demise by his crewmates, trapped in a battle with life and death, love and war — Vance makes a promise to Luenos that will change their lives forever.
But enemies aren’t always who you think they are.
And betrayals might be just around the corn

My Review: I received an ARC from the author in exchange for an honest review. I can't say I truly enjoyed the story as it was a little bit like I was missing bits of it as I was reading. I'm not sure if this is the author's usual style (he's a new to me author) but I found it had too much unexplained and I had trouble staying in the story. Mostly because of trying to figure out what was going on - like why were they going to Mars and where did they find the first alien? My problem was that, although the characters were well written, there was not enough of the setting or background to make sense of the story.
The book is due for release at the end of the month, and there might actually be a lot of change from what I've read in the ARC, so I might see if I can afford to buy it and try a reread then, if it does reads better I will revise this review.
I have just received an email from the author and it turns out I wasn't missing anything, the ARC was. The author sent me a paragraph that was missing from the ARC that should have been there but wasn't. Please be aware that this review will be revised once I've read the published version.
Thank you all for your understanding and patience in the mean time.
Posted by felinewyvern at 9:33 pm