Reviewing Knitting A Broken Heart Back Together by Ari McKay, 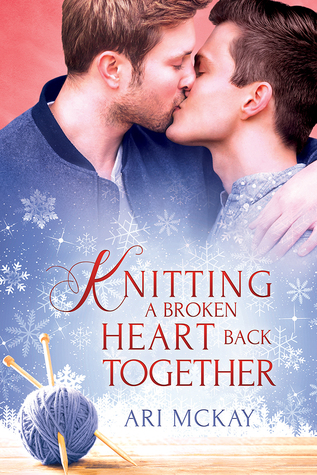 Knitting a Broken Heart Back Together by Ari McKay 4*
BLURB: Second Edition
When a Christmas shopping expedition brings Tomy Peralta into Jason Winters’s yarn store, both men feel an immediate and intense spark of attraction, but dance instructor Tomy intends to propose to his boyfriend, Sean, at Christmas. Unfortunately for Tomy, marriage isn’t on career-minded Sean’s agenda. Heartbroken, Tomy throws himself into his work until his mother convinces him that learning to knit might help take his mind off his failed romance.
Jason falls hard for Tomy, but he knows Tomy needs time to heal and to trust in love again. As Jason teaches Tomy to knit, Tomy teaches him to dance in return. Just when it seems Tomy is ready for a new romance, Sean shows up, wanting Tomy back. Will Tomy give his heart to Sean once more, or will Tomy finally see Sean for who he truly is, and choose the man who helped him knit his heart together again?

My Review: I received a copy in exchange for an honest review. Apart from constantly reading Tomy (rhymes with Tony) as Tommy I have no complaints about this book. It's a lovely sweet story about slowly wooing his love interest by a guy who knows what he wants and doesn't mind that it takes a long time to get it. That aspect actually made it seem more believable than a rushed one would have, especially as the romance was just right for the two of them. However don't think that, because it's a nice slow romance, that there aren't also some sexy hot scenes in it because you'd be wrong. I also liked the fact that knitting played a part in the story, as I think it's lovely when men knit and are not scared to admit to doing so.

Posted by felinewyvern at 6:28 pm