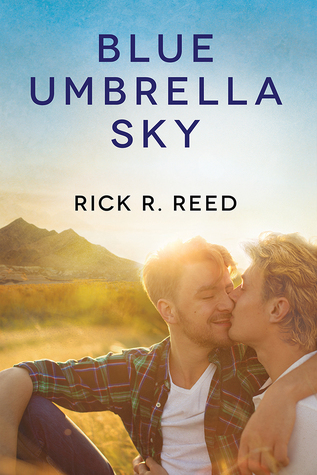 Blue Umbrella Sky by Rick R. Reed
BLURB:Milt Grabaur has left his life, home, and teaching career in Ohio to start anew. The Summer Winds trailer park in Palm Springs, butted up against the San Jacinto mountain range, seems the perfect place to forget the pain of nursing his beloved husband through Alzheimer’s and seeing him off on his final passage.
Billy Blue is a sexy California surfer type who once dreamed of being a singer but now works at Trader Joe’s and lives in his own trailer at Summer Winds. He’s focused on recovery from the alcoholism that put his dreams on hold.
When his new neighbor moves in, Billy falls for the gray-eyed man. His sadness and loneliness awaken something Billy’s never felt before—real love.
When a summer storm and flash flood jeopardize Milt’s home, Billy comes to the rescue, hoping the two men might get better acquainted… and maybe begin a new romance.
But Milt’s devotion to his late husband is strong, and he worries that acting on his attraction will be a betrayal.
Can they lay down their baggage and find out how redemptive love can be?

My Review: I received a copy from Signal Boost Promotions in exchange for an honest review. I want to say straight away that I was tempted to give this one a three star rating due to it being a misleading blurb. I expected a romance with lots of angst and sexy stuff but did not get it. What I did get instead was a very insightful story about two men who are dealing with some of life's hardest emotional problems and learning to establish a relationship together outside of those problems. The manner in which I got them is what decided me on my final rating.
As the daughter of two alcoholics I know how hard it is to stay sober and, as a widow, I know equally as well how hard it is to deal with the death of a loved one after years of loving and a long term illness (though thankfully my late husband did not have Alzheimers).
Rick R. Read covers both these issues, and the current relationship build up, through flashbacks to their earlier lives (so if you aren't keen on that kind of plot line I recommend you don't read it) personally I found it was perfect for the story as it gave a sensitive and non schmaltzy look at both alcoholism and long term mourning.
I honestly can't think of what else to say that isn't already said in the blurb so I'll just leave it with one lst comment to the author - Will Rick ever sing again?
Posted by felinewyvern at 6:12 pm