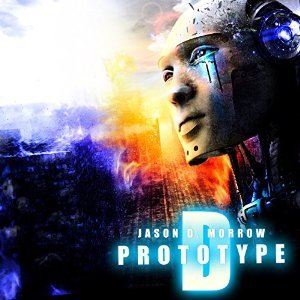 Prototype D (Prototype D #1) written by Jason D. Morrow & narrated by James Foster(Narrator) 4*
BLURB: A hundred years after the world is decimated by nuclear wars, humanity has been reduced to one surviving city of people called Mainlanders. They have food, water, and a wall that separates them from their enemies—the Outlanders.
Branded as savages, the Outlanders have grown in number and their attacks against the city have become more brutal. Increasingly, they threaten to overtake the city, bringing with them the doom and destruction that has plagued mankind for over a century. What the Mainlanders need is a weapon.
Des is the first robot created with a full range of human emotions. His reasoning skills and thought processes will make it so no human will ever have to step foot on the battlefield again. But when Des realizes his true purpose—to help destroy the Outlanders—he suspects that the real enemies might not be the people he was built to destroy, but those who created him.

My Review: “I was voluntarily provided this free review copy audiobook by the author, narrator, or publisher.” If it hadn't been for the very nice voice of the narrator I might have given up on this book and that would have been a shame. After the slight dragging at the beginning I really enjoyed this and felt it had a touch of Asimov in the robot's personality and reasoning. But it wasn't a blind copying of the master's works rather it is a lovely modern take on how humans and robots might end up interacting after an apocalypse. I definitely recommend this to anyone who likes a well written and narrated story about human and robot interaction or who just likes a truly in depth science fiction about the human psyche and how to duplicate what makes us human.
Posted by felinewyvern at 6:43 pm