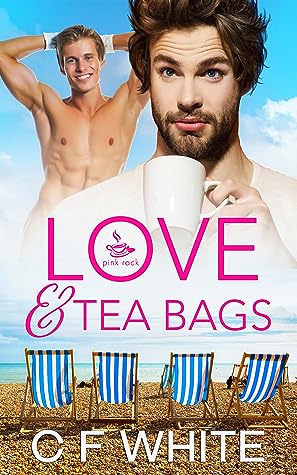 Love & Tea Bags (Pink Rock #1) by C.F. White 2*
BLURB: Fate can be written in a tea bag too.
Mark Johnson is hitting his forties and is stuck in a rut.
He's had the same boring office job for ten years, with no motivation or inclination to change it. The same crumbling house for ten years, with no cash or know-how to fix it. And the same Facebook status for five years—it's complicated. It isn't. He's single. He just doesn't want to correct it. That would be admitting defeat.
The day a tea bag splats onto his face whilst he’s emptying the dregs of his morning cuppa at Macy's Tea Shoppe is the one that makes him question each of his current life choices…the tea bag and that the shop is currently being run by one rather friendly, rather hunky, but rather young Australian named Bradley Summers.
Tea has never tasted so good.


My Review:I received a copy in exchange for an honest review. I believe this was meant to be a sweet and amusing story about these guys, but I'm afraid I just couldn't get into either of the characters. In fact Mark and his internal dialogue about tea and other things was really a drag for me. As for Bradley I felt he was more a caricature of what an Australian should be like rather than a real man. So overall I just didn't much like the book even though the writing itself was excellent. Unfortunately you all will have to wait until 16th July to get your own copy and see what you make of it.
Posted by felinewyvern at 9:56 pm