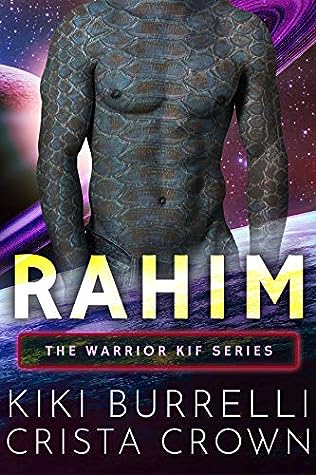 Rahim (Kif Warriors #5) by Kiki Burrelli and Crista Crown 4*
BLURB: A frozen prince calls for a hero. The Fires send him a warrior.
For Rahim, life with his warrior brothers couldn’t be better, now that they’re not fighting for their survival on a pirate ship. Free to soar through space, Rahim and his kif are on a mission to explore their way home. When they get a cryptic invitation from a mysterious source, they eagerly answer the call.
Prince Nanuq is facing his wedding day. To live in the harsh frozen landscape, his people have adapted. Royals are married to entire tribes of men to ensure an heir. But Nanuq never accepted the burly tribal leader he’s been betrothed to all his life. And he wants more than a life of ice.
Though everyone made fun of him for it, Nanuq alone knows how to listen to the falling snow, and the drifts have been telling him for years that his mate is elsewhere.
Desperate to escape the destiny his family has laid out for him, he sends an invitation for his wedding to the man the snow has been telling him about his whole life. It’s his last hope.
The Asraf warriors expect an interesting vacation or an intriguing mystery, but as Rahim and his kif break through the ice, they find a landscape much harsher than they expected, and a prince who needs their rescuing.

My Review: I received a copy in exchange for an honest review. Rahim is the fifth book in the Kif Warriors, a rather interesting sci-fi mpreg series. So, when I saw they were offering the chance of reviewing it I couldn't resist, as I'd already enjoyed all of the previous books. The thing with these books is that the authors have a really rare talent of making all the aliens 'alien' and each of the pregnancies a little bit unusual, with the children also being a unique blend of the Kif father and the alien father to make them all quite distinctive. This is one reason that I've like them so much as this isn't always found even in pure Science Fiction.
In this story I found all the fun, passion, adventure and romance that is present in each Kif Warrior book. All the previous couples and their children make an appearance and the romance between Rahim and Nanuq is exactly what I've come to expect from these authors. However, for the most enjoyment, you will need to read them in order, as there is an over arcing story line that might lead you to get lost when reading them out of order.
If you are interested in reading the previous books the Goodreads link to the series is here.
Posted by felinewyvern at 7:13 pm