Review of Then Sawyer Happened by Hurri Cosmo 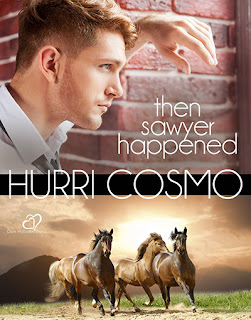 Then Sawyer Happened by Hurri Cosmo 4*

BLURB:  Trace has had a run of bad luck. He lost his job, his boyfriend of two years was cheating on him, and his apartment building burned right to the ground with all his worldly possessions.
So Trace heads for the ranch owned by his aunt Lois. But before he arrives, Lois is in a terrible car accident that nearly takes her life, and Trace finds himself in charge of the ranch kitchen. Sounds simple enough and it's the least he can do for his recuperating aunt.
Then Sawyer happens.
Sawyer is his aunt's sexy straight ranch manager. Meeting the man should have been okay, except it was in the middle of his aunt's kitchen at five in the morning and Trace was nearly naked. Then the next day Trace proceeded to set his aunt's house on fire and the brooding Sawyer comes to the rescue.
Not to mention Aunt Lois’s “accident” was actually attempted murder and it seems those same people want Trace dead, too.
Looks like Trace’s luck followed him.
How can Trace figure out who's trying to kill him AND keep Sawyer from finding out he's hot for the cowboy?
He probably can’t. But he’s going to try.

My Review: Book provided in exchange for an honest review.
This was a new to me author but the name Hurri Cosmo is one I will be looking for in the future. This story had so much going for it that if the next one is like this I know I'll be in for an enjoyable read.
But back to Then Sawyer Happened and a story that has comedy, mystery, action, romance and characters that are so engaging I would love to meet them in real life.  I don't want to give much away as I hate spoilers but I will say I did predict one of the bad guys early on in the story but it didn't really matter as the story had me well hooked by then. If you enjoy cowboys and m/m romance with mystery and comedy mixed in then give this one a try.

Posted by felinewyvern at 7:18 pm