Hi Amy, thank you for agreeing to this interview. Tell us a little about yourself, your background, and your current book.


Thanks for having me! I’m a writer and archivist from Michigan and my absolute favorite thing about summer is going to carnivals. It’s been that way ever since I was little, so I suppose it’s no surprise that I eventually ended up writing novels about them. Sideshow is one of the results of this obsession. It is a work of historical fiction that takes place in 1957 and follows the adventures of Abby Amaro as she joins a traveling carnival and finds herself, and love, along the midway.

What is the most satisfying thing about being a writer?


Being a writer can be very isolating in many ways. Luckily there’s now social media and other social groups, but it’s still work that, for most part, is done alone. The most satisfying thing is finally being able to share all that hard work with other people. It warms my heart to see my book in the hands of others or on library shelves, to know that my words are out there for someone to find. There’s no better feeling than that.

Do your characters ever take over your writing and make the story go somewhere you hadn’t originally planned?


Oh, they do that to me all the time. They never stick to the plan. It’s something I generally go into a story expecting. I know that it sounds silly because as a writer, you created these characters in your own head; you are responsible for what they do, so it would seem easy enough to make them stick to your outline. Still, anyone who’s ever experienced a particularly stubborn character knows how forced things can seem if you don’t let them do what they want.

How did you celebrate the release of your book?


I bought myself a dress! I know that sounds really simplistic, but I’m pretty frugal when it comes to clothes and I decided that just this once I’d go to a nice vintage shop and choose the dress I would wear to any potential readings. It’s a cream and gold dress from the 1950s that reminds me of champagne. Speaking of which, there was also a bottle of “special occasion” champagne that I had been waiting for just the right reason to open. This seemed like a pretty good reason.

How did you come up with the idea for this book?


This one’s been rattling around in my brain for a long while, but it really came about after I had finished  “The Fire-Eater’s Daughter” for the Summer Love anthology. I really wanted to expand the world that I had begun working with in that short story, but I wasn’t ready to write a full-length novel about those particular characters yet, so I began to consider other possible characters. I went through a number of different ideas before returning to an old concept I had about an opera singer and I knew that Abby and Suprema had been waiting for me all along.

Have you ever written naked?


Fie! I am a lady! *waves fan* No, I kid, but no I actually haven’t. I get cold very easily. I’m the kind of person who is wrapped up in a blanket on a 95 degree, 80% humidity summer day. I have written in pajamas a number of times. Some days I have to get right to writing, I don’t have time for all that changing nonsense.

Thank you for joining me, it's been a pleasure and for those who haven't read my previous post here's a little bit about the book. However if you go to my previous post you have a chance to win either a GC or an ecopy of the book. 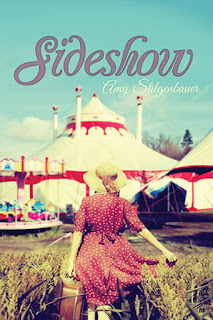 Blurb:
Abby Amaro wants to sing at La Scala Opera House, but she’s a good girl, and in 1957 good girls get married. Still, when she receives her first marriage proposal, she freezes, knowing the way her suitor makes her feel bodes trouble. When he won’t take no for an answer, she flees, joining up with a traveling carnival.

Thanks to a burlesque trapeze artist and the world’s saddest clown, Abby bides her time and fits in until she can rejoin the world she knows. She doesn’t expect a sideshow strongwoman named Suprema, who captures her imagination. As the carnival makes its way across the Midwest, Abby learns much more than she had ever imagined—about herself, about her identity, and, most importantly, about love.
Posted by felinewyvern at 7:30 am