Synopsis:
After his unusual reaction to a weapon, Commando Varean Donnelly is accused of being a shape-shifting alien and imprisoned onboard the Imojenna. Sure, he has abilities he keeps hidden from everyone—including the gorgeous doc examining him—because the government makes sure people as different as him disappear. For good.Imojenna doctor Kira Sasaki knows there’s something different about the handsome commando the captain’s thrown in their brig. She doesn’t think he’s Reidar, although he might have been a victim of their cruel experiments. But when Kira learns the stubborn commando’s racial make-up, she finds herself torn between defending him to Captain Rian Sherron and his crew or urging Varean to escape while he still can.
The Atrophy series is best enjoyed in order:
Book #1 Atrophy
Book #2 Quantum
Book #3 Diffraction 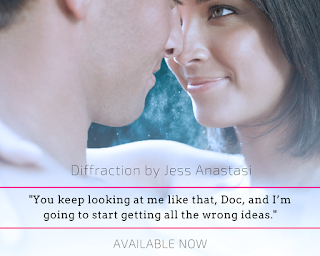 DON'T MISS THE OTHER BOOKS IN THE ATROPHY SERIES!

BUY:
Amazon: http://amzn.to/2ijqiMv
Paperback: http://amzn.to/2ijw1Sl
Amazon CA: http://amzn.to/2huy9Vk
Amazon UK: http://amzn.to/2ijzdxq
Amazon AU: http://amzn.to/2hSuYrr
B&N: http://bit.ly/2iKZlEw
Kobo: http://bit.ly/2hAVUzV
iBooks: http://apple.co/2ijz7WA
Synopsis:
Captain Admiral Zander Graydon has seen a lot of action, but almost getting killed three times in one day is pushing it. Only the company of his new assistant, Lieutenant Marshal Mae Petros, makes things a little easier to swallow. Except the delectable Lieutenant Marshal Petros is hiding a number of secrets, and her presence might have something to do with the continued attempts on his life.
It’s no accident Lieutenant Marshal Mae Petros finds herself in the firing line alongside the charming but very off-limits Captain Admiral Graydon. She’s taken the job as the admiral’s assistant to determine if a shape-shifting alien has killed the CO and assumed his form. Whether the admiral is human or not, Mae finds herself getting way too close to him as they run for their lives.
Military to the core, Mae and Zander will have to overcome their suspicions of each other to work together, when they realize the fate of the entire universe is at stake.

BUY:
Amazon: http://amzn.to/2iw0qgd
Paperback: http://amzn.to/2iKZesm
Amazon CA: http://amzn.to/2hSrYeS
Amazon UK: http://amzn.to/2ie0vaw
Amazon AU: http://amzn.to/2ijrnnr
B&N: http://bit.ly/2iKYMKP
Kobo: http://bit.ly/2hSzOoE
iBooks: http://apple.co/2ivZyYU
Synopsis:
Twelve years on the prison planet Erebus makes a man long for death. The worst part for Tannin Everette is that he was framed for murder. He's innocent. When the ship Imojenna lands for emergency repairs, Tannin risks everything to escape...only to find himself face to face with the captain's undeniably gorgeous sister.
Zahli Sherron isn't planning on turning Tannin in. In fact, she actually believes him. Sure, he's sexy as every kind of sin, but he's no criminal—so she hides him. But no one escapes from Erebus and lives to tell about it. With every day that passes, Zahli further risks the lives of the entire crew...even as she falls in love with a man she can never have for herself. 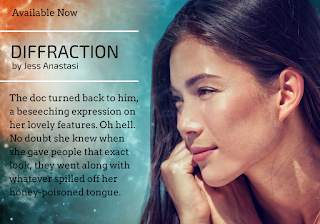 Jess has been making up stories ever since she can remember. Though her messy handwriting made it hard for anyone else to read them, she wasn’t deterred and now she gets to make up stories for a living. She loves loud music, a good book on a rainy day, and probably spends too much time watching too many TV shows. Jess lives in regional Victoria, Australia, with her very supportive husband, three daughters, two border collie dogs, and one cat who thinks he’s one of the kids.
Website | Blog | Facebook | Twitter | Instagram | Goodreads | Newsletter | Amazon Author Profile
ENTER THE GIVEAWAY