BLURB
Whatever your romance reading preference — gay virgin, opposites attract, friends to lovers, or simply fun how-they-met stories — this collection contains a variety of sweet, contemporary, short gay romances, sure to make you smile.
Rewritten and re-edited, these stories were previously published singly and are available now in one collection!
≈ ≈ ≈ ≈ 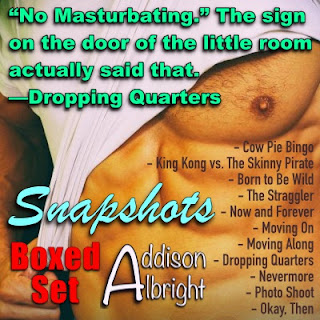 Contains the stories:
* Cow Pie Bingo
* King Kong vs. The Skinny Pirate
* Born to Be Wild
* The Straggler
* Now and Forever
* Moving On
* Moving Along
* Dropping Quarters
* Nevermore
* Photo Shoot
* Okay, Then
≈ ≈ ≈ ≈
Preface:

I love short stories. Sometimes a brief “snapshot” taken from a couple’s larger story is all that’s wanted. The narrative of “how they met” is the focus of six of the shorts in this set—quirky tales ranging from meeting at a charity fundraiser, to college kids pranking each other, to a mishap at a XXX adult video arcade.
Also included is a story featuring a well-established couple’s wedding dilemma, a friends-to-lovers tale, a coming-out-of-the-closet drama, and a continuation short that follows one of those how-we-mets. Rounding out this collection is an account revisiting the main characters from my full-length novel, ’Til Death Do Us Part.
All of these stories are contemporary, although one has a bit of paranormal flavor to it. Heat ratings range from “fairly sweet” to “rather steamy.” Excepting the final story, all were originally written in 2008 and early 2009. One (“Photo Shoot”) started out as a prompt word ficlet that I later fleshed out to a more complete story. Each has received a thorough overhaul, some more extensive than others. I hope you’ll enjoy reading them as much as I did writing them.

**Please note King Kong vs. The Skinny Pirate is FREE as a separate ebook
Goodreads | Amazon US | Amazon UK | iBooks | JMS Books
EXCLUSIVE EXCERPT
(from Born To Be Wild)
Roland stepped to the stereo and turned on the Steppenwolf CD. He cranked up the volume, and the lyrics of Mars Bonfire blared out at them.
The guys had no trouble getting into their roles. Kendall was draped over the back of the kitschy stuffed chair, and Andy was having a blast grinding his pelvis into Kendall’s ass. The rest clearly had their tongues down each other’s throats, and were all arms and legs, humping and necking on the gaudy couches. Yep, they were ready.
Roland glanced out the window as a figure emerged from the front door of the UKB house and headed in their direction. After the doorbell rang, he smiled and paused a few moments before responding.
He flung open the door and stepped slightly to the side. Fisher’s jaw dropped. Their performance was better than Fisher had apparently been prepared to witness. He sputtered as he regained composure and huffed like he was going to throw a snit.
But Roland didn’t give him the chance. He pulled Fisher into the room and into his arms, then brought his mouth down onto the man’s.


Fisher’s initial reaction was to freeze, but as Roland pressed with his tongue, Fisher relaxed and opened up.
Find Snapshots on Goodreads
Buy Links:
Amazon US | Amazon UK | iBooks | JMS Books